The stela of Ramose

The stela of Ramose is part of a large collection which, thanks to restoration funded by Gli Scarabei, can once again be admired by the public in all its splendor. The artifact is divided into two registers: in the upper portion, in the center, the goddess Qadesh is depicted standing above a lion. On the right, the god Reshep holds weapons in both hands and wears a crown on his head similar to the white crown of Upper Egypt. On the left, is Min-Amon-Ra, the ithyphallic god of the eastern desert.
The lower register features a man and a woman, both kneeling with arms raised in adoration: they are Ramose the "Royal scribe in the Place of Truth” and his wife Mutemunia.
The two figures are framed by seven columns of hieroglyphics. 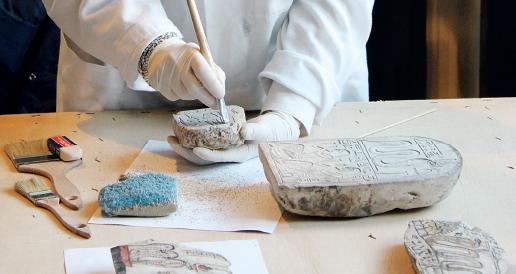